It looks like Saturn was launched in Japan exactly 25 years ago ! Happy Birthday Saturn

If wikipedia is right, anniversary is today.
25 years ... that's a quarter of a century ! I feel old to realize that but shall do my best to continue loving my Saturn for the next incoming 25 years

Just a quick article to announce that PPcenter (which gathers this blog, Planet de Pon, my custom cartridges, Pseudo Saturn Kai and some other projects) is now correctly supporting HTTPS !
Webou (which host PPcenter) was kindly providing HTTPS for already a long while but my homemade CMS was messing up the display of my homepage : for obscure reason (I honestly don't remember why) it was trying to load the page's CSS from an absolute URL, including the "http", and as HTTPS doesn't really likes to load something from an unsecured location, the CSS was discarded so that the page display was ... minimalistic 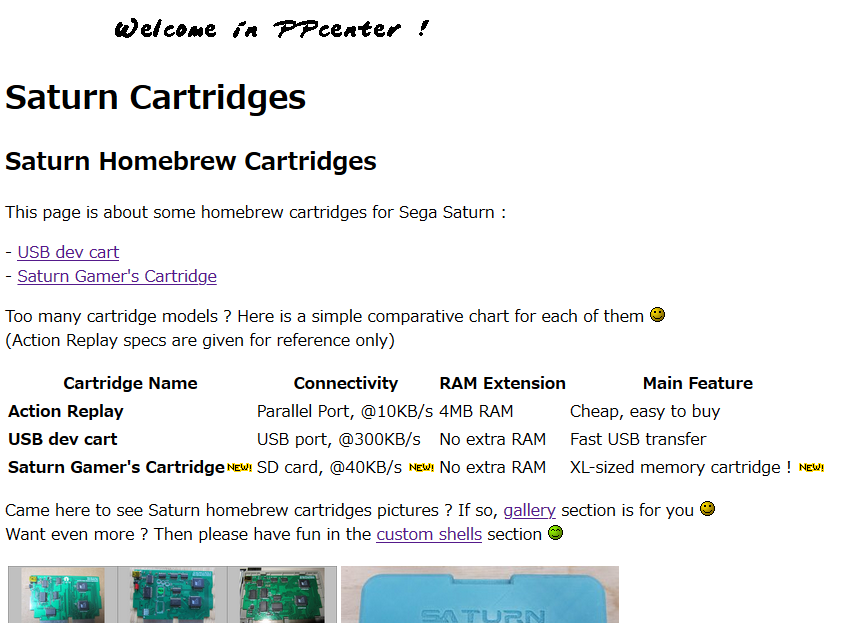 This is now fixed, and additionally trying to use plain HTTP should also magically redirect to HTTPS.
That's quite helpful, because all the labels for Gamer's Cartridge are referring my homepage as "HTTP" (*) and I really didn't wanted to have to re-design theses labels 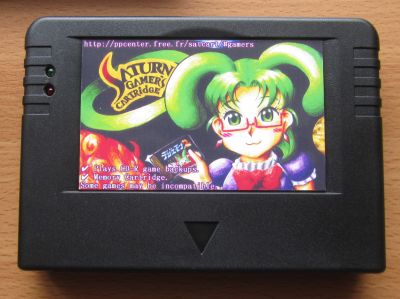 Forgive me for the link : http was still a thing when
Gamer's Cartridge labels were designed !

It took one eye blink from previous article to directly arrive on today, the last day of September ... time flies

And, in application of the contract between my Saturn projects and PPCenter, I have to write at least one blog article per month

(*)
My remaining free time for this month is around 20 minutes, so I'm hurrying up to write an article

(*) PPCenter is the entity which manages the hobbies I do on my spare time. As a consequence, it also manages the revenues earned from my homebrew projects, which is why I should finish this damn article if I want to eat something else than cup noodles during next month

So I hope this Q&D article will please you, and in the meantime of this page being loaded, don't forget to send me a donation ! Every little bit helps and contribute to pay my the gasoline for my car as well as three meals per day

(as indicated in the title)

A while ago, I finally decided to put public the page about custom shells for my cartridges. Theses were designed, 3D-printed and offered by Zone66x : he is the only one to deserves the credits for this hard work

Custom 3D printed shells
- the gallery -
Main interest of theses custom shells is to have their shape carefully designed to hold SD card on the top of the cartridge : with regular shell made from Action Replay shells, the SD card sticks out by 2-3 mm, which was improved on custom shells with have enclosure to be at the same height of SD card's.
Another good point is that theses shells were prototyped in several shapes and colors ! I personally like transparent shells like this one

About the points that put the advantage on Action Replay shells is the solidity : Action Replay shells are way more stronger, but this was expected because theses are "just" prototypes. I suppose that using commercial 3D printing service and appropriate material would provide stronger shells, but I didn't tested things this far.
IMPORTANT : theses custom shells were offered, hence the cartridges using theses shells are not for sale and for my own collection or for friends, etc.
If you want a Gamer's Cartridge and are OK to get an Action Replay shell instead of custom one, then please check their order page from time to time and use the order form when it is available

Sorry for the clickbait title, but I'm sorry to say that it's not possible to fix your Action Replay (or any similar clone) with Pseudo Saturn Kai

Below are common myths wrongly related with Pseudo Saturn Kai : theses are detailed in this blog article in the hope it will help users with similar problems, and also to -hopefully- relieve my emails inbox regarding theses inquiries ...
Q1 : Expansion RAM no longer works ! Will reflashing Pseudo Saturn Kai help something ?
A1 : It won't change anything ! Expansion RAM is a cartridge hardware feature and consequently Pseudo Saturn Kai (software side of the cartridge) doesn't have any interaction with it.
→ If your cartridge is experiencing troubles with expansion RAM, it's likely to be related to cartridge connection or cartridge itself. So rather than e-mailing me, it's more relevant to contact the manufacturer or re-seller of your cartridge about this kind of issue.
Generally speaking, all Action Replay cartridges and their clones are using legacy electronic components no longer manufactured for nearly a decade. So even if your cartridge was sold as "brand new", it may either contain refurbished chips, or counterfeit chips, or both : there's not a lot to expect regarding quality.
Q2 : Cartridge self test feature in Pseudo Saturn Kai doesn't reports any problem : does it means that the hardware of my cartridge is working correctly ? And consequently does it means that the XYZ problem I'm experiencing is related to Pseudo Saturn Kai ?
A2 : Cartridge self test feature just tests the bare minimum of the cartridge : if it fails, then there is certainly a problem around hardware. Conversely, it doesn't means anything when no problem is reported.
BTW, I developed this self test feature to quickly test the hardware of a cartridge, and not to get a proof that hardware is not guilty when a problem happens ! It's always exhausting to read stuff like "cartridge self test passed, so my XYZ problem is caused by Pseudo Saturn Kai" ...
Q3 : I heard that game XYZ isn't compatible with Pseudo Saturn Kai ? Is that true !? Hurry up to fix that !
A3 : There are many causes of incompatibility other than Pseudo Saturn Kai :
Q4 : Are you earning royalties from Action Replay (and other clones) cartridge manufacturers ? If yes, then hurry up to fix my hardware problem !
A4 : I don't earn anything from legacy cartridge manufacturers : you paid $35 for your Action Replay cartridge ? I received $0 from it. You paid $60 for a red "all-in-one" ©®TM cartridge ? I received $0 from it.
Also, I never begged any crowdfunding to develop Pseudo Saturn Kai, and even preferred to nullify my donate page rather than receiving donation related to Pseudo Saturn Kai. You paid $0 for Pseudo Saturn Kai to be developed ? I did it during hundred of hours of my free time and sometimes with high doses of motivation

And while restricting Pseudo Saturn Kai usage to my own projects (USB dev cart and Gamer's Cartridge) would had significantly simplified software architecture, I did my best to keep Pseudo Saturn Kai compatible with other legacy cartridges so that a wide range of users can enjoy playing Saturn.
Maybe that looks simple to do, but it's really not : the more complex the software architecture is, the more likely development becomes difficult, or that unexpected problem happens in the meanwhile.
So if your cartridge is experiencing a problem, it would be appreciated if its manufacturer could be blamed instead of me

This Q4 / A4 is an half-joke : so far I wasn't asked about that, but it is mentioned here to put emphasis on all the time and energy it cost to develop Pseudo Saturn Kai (I started its development at the end of 2014 !), and all the returns I have from it ("fix my flaky cartridge", "fix support for that poorly dumped game") ...
It took time, but I could find a card a bit linked to customer support from my Dragon Ball cards collection, and hope you will appreciate it ... the card, not my customer support skills 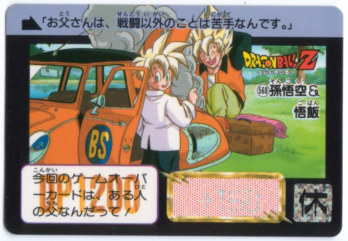 Read more How to fix your cartridge with Pseudo Saturn Kai

Why such kind of technical demo in Pseudo Saturn Kai ? Simply because it was fun to implement

Additionally, this is also a small wink to the good old times I was daily using a TI-89 calculator : this Easter egg was ported from Voxel2Space demo by Kai Kostack.
I still keep using my TI-89, but way less more than when I was a student. It's actually quite handy to do quick math or binary to (hexa)decimal conversions at work : the more Windows evolves, the more horrible its builtin calculator becomes (seriously, my eyes are about to bleed each time I see the Windows 10 calculator

), so it's good to have a physical calculator at reach of hands

Let's play a game with this Easter egg : the first one to find the correct keys combo will be rewarded by a Gamer's Cartridge from my own collection !
During the last years, I was gathering Gamer's Cartridges with custom 3D printed shells and PCBs from various production batches and different times of the development of the cartridge.
Rather than just putting on sale, theses are kept for good occasions, and finding this keys combo is one of such kind of good occasions

Custom cartridge shell .
Thanks to zone66x for designing
and printing them

Rules :
- Post the correct keys combo in the comments of this article.
- This is limited to one Gamer's Cartridge, for one lucky Pseudo Saturn Kai user.
- Don't forget to indicate an email address where you can be contacted !
This is necessary for offering the reward.
- Choice of the Gamer's Cartridge shell color etc is at my own discretion.
- Application will end in December 31st, 2019 : if nobody find the key combo until that time, I shall re-use this Gamer's Cartridge for similar kind of games with my Saturn projects.

Rss feed of the category